Last month we lamented the limited number of affordable two-door coupes. This month we're doing the same with convertibles. First, we'll complain that things aren't what they used to be. We'll finish by showing you factory lease specials on the (few) attractive and sporty convertibles that still grace our great country.

Think about the manufacturers that have dropped their droptops: Cadillac, Chrysler, Dodge, Honda, Mitsubishi, Nissan, Toyota, Volkswagen, Volvo. Most genuine convertibles—those with a folding soft top or a retracting hard top that leaves nothing but sky above the driver—are built by luxury brands. The longest-running, most affordable convertibles on the market (Camaro, Mustang, Miata) have no July deals. On the high end, the Corvette isn't a true convertible anymore, Ferrari isn't discounting the Portofino, and Lexus never runs lease deals, so that eliminates the gorgeous LC500. That leaves us with a short list of German ragtops and a British car with a German engine.

More on Leasing
Leasing vs. Buying a Car: Which Is Best for You? 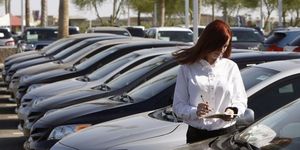 Bear in mind, we're considering only factory lease specials (Audi, which makes three convertibles, has none). You could very well get a good deal on a new convertible with your local dealer, especially if you live in a cold-weather state where convertibles often sit for months on end.

Make sure you first read our leasing guide. We've covered everything that may get glossed over in the showroom: advertising fees, money factors, residuals, legal implications, and all the other fine print that could cost you thousands more than you'd expect. When comparing similar cars, be aware that a lower monthly price often demands more money up front. As with any national lease special, enter your ZIP code on an automaker's website to check if these deals apply to your area. Prices do not include taxes or fees and may be higher or lower depending on your location. Research is always your friend.

Lost in BMW's lineup is the Z4, a talented little roadster that gets little respect among performance convertibles. It's certainly not due to the Z8-inspired rear end or the sublime turbo engines and balanced chassis tuning. Blame BMW, which refuses to give its only two-seat sports car a manual transmission or a full-blown M version. The Z4 is more of a miniature 4-series, though the short wheelbase and lighter weight make it more exciting on curvy roads. Toyota makes the friskier Z4, in the form of the Supra, but that's not a roadster. The actual Z4 is more about looking good, which is why we're recommending the four-cylinder sDrive30i. And this lease includes luxuries such as seats with power lumbar.

We see new 4-series convertibles dancing all over Connecticut. People are drawn to the 4-series for the same reasons they love the 3: It's relatively affordable, the perfect size, and available in so many body styles. A 430i on summer tires can still rock your socks, and this lease includes the Premium package with heated seats and a heated steering wheel to keep the summer fun lasting throughout the fall.

Like the 4-series, the 8-series is a model of versatility, with convertible, coupe, and Gran Coupe (i.e., sedan) body styles. Fast and coddling, though suffering major blind spots when the top is raised, the M850i is exotic enough but doesn't hammer the point home like a 911 Turbo S Cabrio or the (now-discontinued) Mercedes S550 cabriolet. If you need a 2.5-second acceleration time and loud Miami paint jobs, there's the M8 Competition. But the lease for this semi-M version comes with plenty of toys including the Driving Assistance Professional package that brings BMW's enhanced cruise control.

Enthusiasts miss the point of the M4 convertible, which they decry as heavier and flexier than the M4 hardtop. But just like the original E36 M3 convertible, the M4 convertible sells because it's the most expensive M4—or maybe because it's the fastest 4-series droptop. For many people who can throw a mortgage payment at a car, that's the whole point. Unlike the coupe, the convertible is available only in all-wheel-drive Competition form with the automatic. BMW also allows some wild color combinations (such as Isle of Man Green, a pretty color on our long-term M3, over yellow-and-baby-blue leather seats). This lease includes laser headlights and the Executive package with remote engine start.

Mercedes will soon consolidate the C- and E-class softtops into the CLE, which will split the difference, just like the CLK did in the late 1990s and 2000s. Oh well. This is the final model year for the C-class cab, and it's now the older generation in comparison to the brand-new 2022 sedan. Although it dates back to 2016 it's still a gorgeous car, and the AMG version is the best way to hear the raspy, raucous turbo six. It's significantly less than the M4, and in traffic, no one will know it's slower. Certainly, it's much prettier.

It feels like we just got to know the E-class cabriolet, and just like the C, it's headed off to the eternal used-car lot when the next-gen E-class arrives in a few years. The 450 indicates a turbocharged, hybrid-assisted inline-six that's velvety and quiet, with a supple ride to match. This is a classic big Benz convertible in the manner of a 280SE. It's unapologetically rich. A neck heater comes standard, but the heated armrests and massaging seats do not. Make sure you order them—with the top down on a cool night and yacht rock on the stereo, you'll be in heaven.

The three-cylinder engine makes this cute Mini Cooper unique in the world of droptops. The Mini's top slides on roof rails before it retracts, so you can open the front portion like a sunroof. The roof can also display a giant British flag. There's plenty more weirdness, like the Openometer that tracks how long the top is down for the life of the car. The company is owned by BMW, but Mini clearly has complete freedom to party.

This content is created and maintained by a third party, and imported onto this page to help users provide their email addresses. You may be able to find more information about this and similar content at piano.io
Advertisement - Continue Reading Below
More From Leasing
Best Lease Deals for July 2022, $469/Month & Up
How to Buy or Lease a New Car
Advertisement - Continue Reading Below
Honda, GM Toughen Lease Transfer Restrictions
Honda Launches Used Vehicle Leasing Program
Lincoln, Lexus Offer Ultra-Low-Mileage Car Leases
Leasing vs. Buying a Car: Which Is Best for You?
Looking to Buy or Lease? A Word of Advice
Electric Vehicle Lease Deals
States Tell Automakers to Accept Returned Leases
Your Rights If Dealer Won't Take Lease Back